Guys and Dolls: Meet the gay couple who have spent more than 2 decades carrying a doll around the world 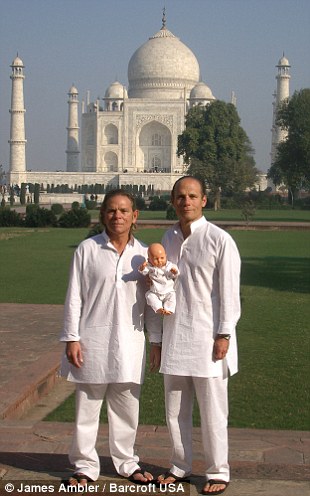 International travel: AJ Sapolnick and Mark Kirkby pose with their ‘son’, Digby the plastic doll, at the Taj Mahal

At the age of 20, New Yorker Digby du Pont can thank his parents for a life that would make most envious.

With his well-heeled parents he has travelled to all seven continents, visiting the Taj Mahal in India and the Pyramids at Giza, and cruising in the Indian Ocean along the way.

Dressed in the finest clothes and jewellery, Digby has sat down for dinner next to celebrities at some of New York’s most exclusive restaurants. He has even turned down an offer to be baptised by the Bishop of London.

Digby is a plastic doll.

But that hasn’t stopped his two dads treating him like a real son for the past 21 years.

Dressing him in shoes from Bloomingdales and giving him a Cartier watch, Mark Kirby and A.J Sapolnick have become so attached to their doll son that friends have taken to calling them ‘The Digbys’.

‘We found Digby in a Paris flea market in 1990 and we both had an immediate connection with him,’ said Mark, who has lived with AJ for the past 26 years.

‘We haggled over his price and paid £4 for him. He was a total mess, covered in mouldy dew and was not wearing any clothes.

‘We brought him back to our room and cleaned him up and it was there that our family began.’

Even though finding Digby in Paris came through chance, Mark and AJ were in fact on the lookout for a suitable child to adopt.

‘Around that time we had a lot of friends that were beginning to have children and this was interfering with our social life,’ said AJ.

‘They couldn’t go anywhere because of their children and they would bore you with photographs.

‘So I said to Mark that we should have ourselves a baby who wouldn’t interfere with our social lives.

‘So that was when we decided to have a doll baby. 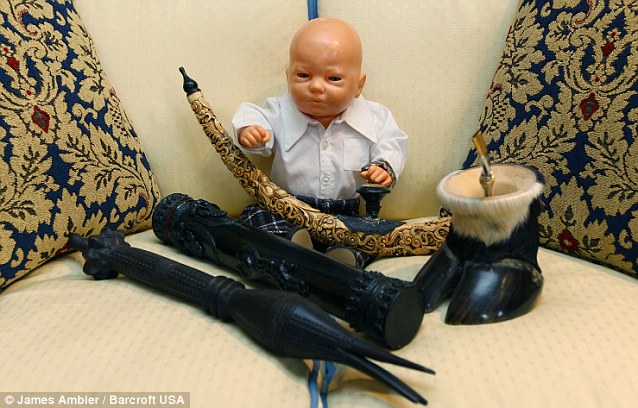 Souvenirs: Digby beside some of his artifacts from around the world: a document holder from Burma, an opium pipe from Vietnam, a cup made out of cows hoof from South Africa, and a cannibal fork from Fuji

‘You have to understand that this was back when gay people had just begun adopting children and in some states in America it is still illegal.

‘This was a conscious choice for us. We never wanted to adopt a baby, Digby was perfect for us.

‘Digby would be our chance to bore our friends with our pictures!’

As a thoroughly modern family, the Digbys have traveled across all seven continents, to over 100 different countries and taken more than 13,000 holiday snaps of them and their vinyl baby along the way.

For Mark and A.J, their love of Digby has reached a point where to describe him as a doll is viewed by them as a four-letter word, literally.

‘We consider Digby to be a vinyl person, not a doll,’ said Mark.

‘When we travel abroad Digby usually gets a seat on the plane, although I must add that we don’t pay for a separate one for him.

‘We put him on a spare seat if there is one and Digby usually manages to get his own seat.’ 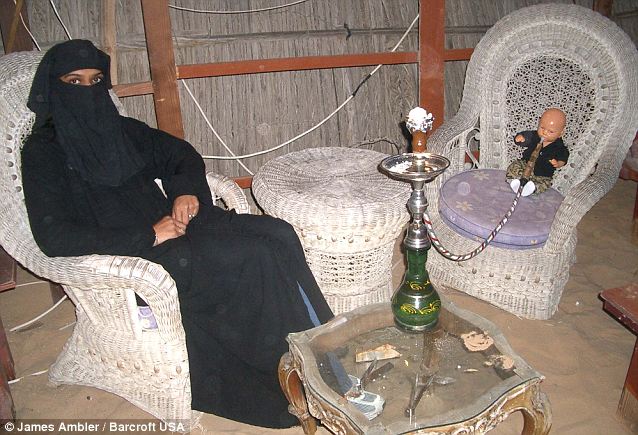 Shisha: Digby on a ‘date’ in 2006 in Dubai, United Arab Emirates. The plastic doll’s doting parents have given him a life most real children can only dream of

But travelling everywhere with a plastic doll has it’s drawbacks. ‘One of main worries when we first started traveling with Digby was that we would be mistaken for drug runners,’ Mark continued.

‘Once in Egypt a border guard wanted to take his head off and we simply wouldn’t allow it.

‘We would never allow him to be taken apart, it would be traumatic and also too difficult to be put him back together.

‘He has traveled so much that he has his own passport. Passport control in some countries stamp it when they have a sense of humour.

‘Since 9/11 we are careful not to push anyone with this, although we appreciate it when they do.’ 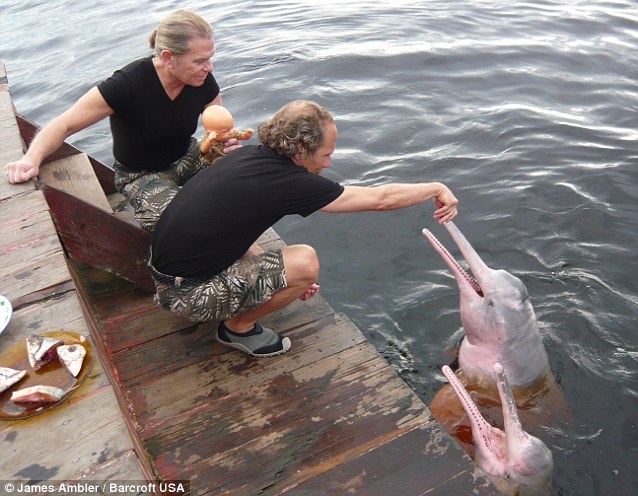 Life experience: Digby and his two dads feed river dolphins, in 2010 in Novo Airao, Brazil. Digby has visited over a hundred countries, on all seven continents

Mark and AJ have mapped out Digby’s life through his clothes and on special occasions the three even wear identical outfits.

‘At the beginning we dressed him as a baby in baby clothes,’ said Mark.

‘And as the years have gone on we have had clothes made for him on our travels in Thailand and India. Here in New York City we know a lady who creates clothes for him.

‘We couldn’t put a value on what we have spent on his clothes even if we wanted to, we have never thought about it.’ 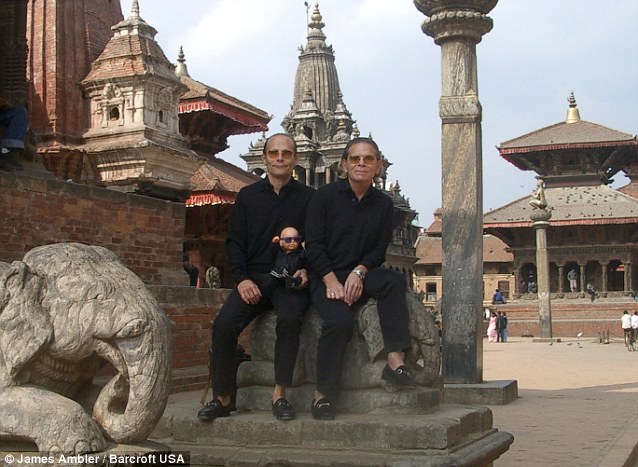 Jet set lifestyle: Digby and his two dads often dress in matching outfits, whether overseas or at home in New York

Beginning taking pictures of Digby and themselves on holiday and around New York City, Mark and AJ have marked all the important events in their 20 year-old-vinyl son’s life.

‘He has had themed birthdays at home and we have had one in Central Park.

‘And to mark his Jewish heritage he has gone through his Bar-Mitzvah too.

‘We have even given him a full name too, which is Digby du Pont, in honour of his French heritage and how he was found under a bridge at the flea market.

‘Although he only goes by that moniker when he is submitting a letter for publication.’

Digby has become so famous that his celebrity is anticipated at some of the most exclusive restaurants in the world.

‘We were at dinner at the exclusive Cipriani restaurant in Venice and the management insisted that Digby not be perched on the edge of the table,’ said A.J

‘Usually he is seated next to us on his own chair and sometimes we have a glass of milk brought over so that he isn’t left out.

‘One time at Le Cirque restaurant in New York we and Digby were sat next to Sarah Ferguson.’ 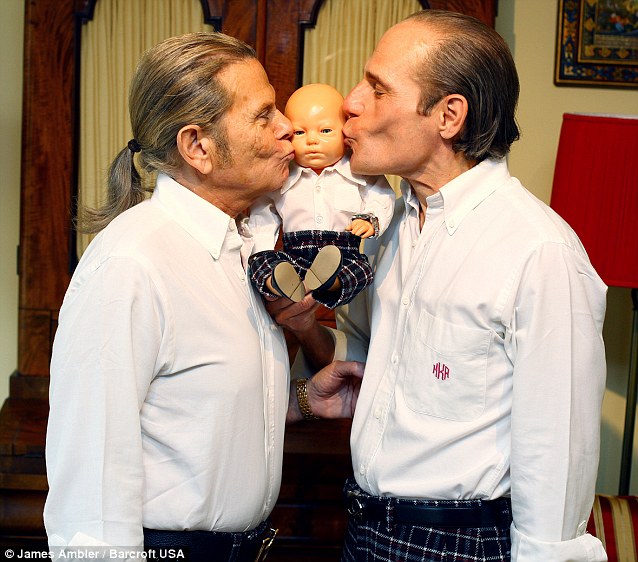 Happy family: AJ and Mark celebrate Digby’s birthday every year on 21 April – the date they bought him from a Paris flea market

It is the reaction of other people to Digby that is the most magical aspect of life with Digby for his fathers.

‘We have been mobbed at the Great Wall of China with Digby,’ said Mark.

‘He becomes the star of the trip we are on, with fellow hotel or cruise guests becoming intrigued as to what he will wear that evening along with ourselves.

‘Once on an Indian cruise from Chennai to Mumbai Richard Chartes, the Bishop of London become so enamoured with Digby that he wanted to baptise him.

‘We told him that Digby had no interest in this because he was Jewish.’

Mark and AJ were once listed by their phone company as the Digbys and their car licence plate is also Digby.

‘Around New York me or Mark will take him out with us for lunch or at night we will dress him in his own pyjamas and sometimes even watch television in bed with him,’ said AJ.

‘People have been emailing or commenting online that they have seen us during our travels.

‘Digby has affected many people all across the world. Digby and us is a story that we are happy to tell.’